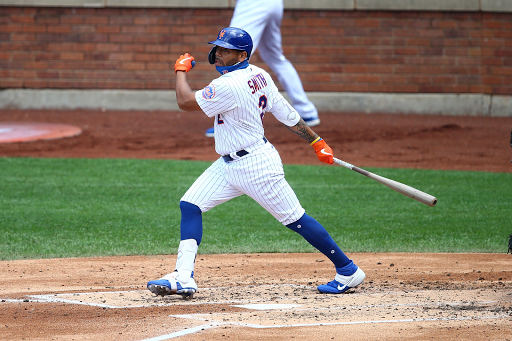 Bank on it.  Put it in ink.  Bet the house.  New York Mets first baseman/outfielder Dominic Smith will become the next big slugger in fantasy baseball as soon as the 2021 season commences.  So confident are we that Smith will post a monster season that we suggest reaching a round or two early over his current draft ADP in order to ensure you have a piece of the action.  Already Smith has hinted at what is to come after he quietly earned some MVP consideration in the shortened 2020 season when he hit 10 home runs, collected 42 RBI, and batted a smooth .316 as he and not Pete Alonso became the slugging talk of the team.

Now in terms of delving in on the particulars, Smith has always been lauded for both his power and ability to hit for average as he was originally the 11th overall pick in the 2013 MLB draft and soon he was tearing things up in the minor leagues.  Alas, Smith would then stumble a bit as an undiagnosed sleep apnea condition left him constantly tired and sapped his concentration and some power.  The issue also led to some run-ins with the Mets front office that included being deactivated by the team for the Grapefruit League opener at the start of 2019.  Once Smith was diagnosed however, he quickly began correcting the condition by hooking up to a BIPAP machine at night to aid in breathing and the results since have been dramatic.  Not only was Smith terrific in 2020 but he also batted .282 with 11 home runs in 197 at-bats in a partial 2019 campaign that saw him fall prey to injury.  Fast forward to 2021 and all is in place for Smith to work either as a cost-effective starting fantasy baseball first baseman, a terrific UTIL or CI option, or as strong as an OF 2 this season.

We already have noted the natural power that Smith possesses and he was on pace for around 30 home runs if 2020 was of the 162-game variety.  Still just 25, Smith has not even reached his prime just yet which speaks to how exciting an investment he is this spring.  Not only a power hitter, Smith has the chops to hit .300 or better yet again as his 22.5 K/9 rate is league average and he draws enough walks with a 7.0 and 9.6 BB/9 marks the last two seasons to keep pitchers honest.  Add in the RBI and runs opportunities that will come in a stacked Mets lineup and eligibility both at first and the outfield and Smith is quite possibly out favorite sleeper of the upcoming season.  So do yourself a favor and get some shares here because you miss out on what is looking like a monster breakout.