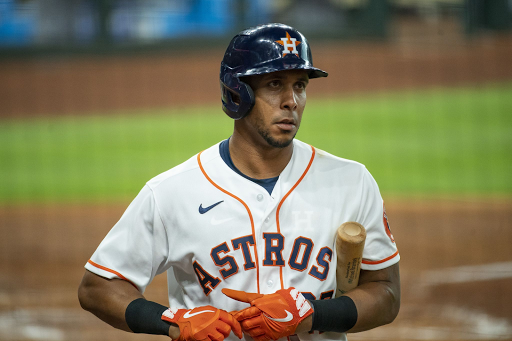 Despite the fact that he will turn 34 in May, the Houston Astros refused to let sweet-swinging outfielder Michael Brantley depart in free agency and his return is especially important after All-Star George Springer took off for Toronto last week.  Now in terms of Brantley, it is not a stretch to say that he may be the best pure hitter in baseball now that Joey Votto has declined and the numbers back it up with the annually high averages and miniscule K rates.  Having hit .300 with 5 homers in the partial 2020 season, Brantley showed no dropoff there as his 15.0 K/0 was insanely good.

Moving back to full season 2019 is a better indicator of forecasting Brantley this season and that campaign saw him put up the following numbers:

Starting with the average, Brantley's .311 mark was the 5th time in the last 7 seasons he has hit .300 or better and that should continue unabated into 2021 given that the splendid K/9 rates remain well under 20.0.  While that number did climb to 15.0 last season, the small sample size applies and again even that number is tremendous.  In addition, Brantley's RBI/runs marks are right on target as he is almost a lock for 90/90 if the health permits.  Brantley not only puts forth great strikeout rates but also habitually registers BB/9 marks in the double digits to increase his chance to score runs.

Now we get to the power and 2019's 22 homers were a career-high for the veteran.  Surely Brantley benefitted from the tight baseball like everyone else and his rate last season fell more in the 15-20 range he is more accustomed.  While it would not be a total surprise is Brantley went for another 22, the smart money is to expect 20 at most and consider anything else a bonus.

Finally, Brantley is not a base stealer anymore with 5 total thefts the last two seasons combined and so even 10-12 is likely asking too much.  That part of his game seems to have fallen by the wayside due to age and so count on four categories of very solid production in a low end SP 2 sense.  Not the most exciting player by any means but Brantley still makes the grade as a stalwart every day fantasy baseball mid-tier outfielder.