2017 FANTASY BASEBALL PROSPECT WATCH: AMED ROSARIO MIGHT BE CLOSER THAN YOU THINK 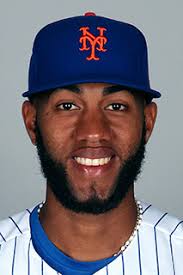 It was another frustrating evening for New York Mets shortstop Jose Reyes Wednesday night as his 0-for-4 performance dropped his season average to a pathetic .054 which is no misprint.  Having already been dropped to the seventh spot in the order, Reyes all of a sudden looks old and appears to not have any clue what to do at the dish.  With a glaring gap now in the lineup and Reyes showing no signs of snapping out of his funk, already the rumor mill is flying with talk that top infield prospect Amed Rosario may find himself in the majors before too long.  On the surface this seems like a rash move as Reyes is a veteran who is likely going through a typical slump that afflicts all batters but with his coming at the start of the year.  On the other hand, Rosario is considered a top 5 prospect in all of baseball who profiles both as an above-average hitter and defender who could improve an already potent Mets team.  Still just 21 years old, Rosario's 6-2 frame screams out future 20-home run hitter and he already is a potent stolen base threat and shows a bat that can hit .300.  He is off to a scorching .393 start at Triple-A with 3 steals in just 30 at-bats to further the hype as well.  So in terms of fantasy baseball, it would not be the worst idea in the world to scoop up Rosario now in an effort to avoid the scramble later when he inevitably gets promoted.  That promotion could be coming before you know it.