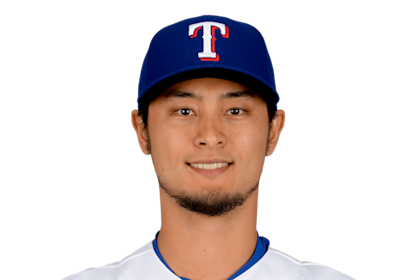 A nice value play presented itself among the starting pitching fraternity last spring when it came to Texas Rangers ace Yu Darvish.  While Darvish was expected to begin the 2016 season on the DL as he further recovered from Tommy John surgery, he reputation as arguably one of the very best strikeout artists in fantasy baseball made him one to target in drafts given his depressed cost.  I was one of those who took advantage of the discount on Darvish as I selected him in the Experts League draft.  Well as it often happens, the best laid plans didn't go according to the script as Darvish quickly came down with shoulder trouble after returning in May; an injury that sent him right back to the disabled list.  Even when he came back in June, Darvish mixed some good and bad the rest of the way; while being particularly rough in September/October as he posted an ugly 4.40 ERA when his owners needed him to pitch well the most.  For the entirety of his 100.1 innings in 2016, Darvish registered an ERA of 3.41 which was not bad coming off Tommy John and even more encouraging, his dominant 11.84 K/9 rate was just off his career-best of 11.89 set in 2013.  Finally, Darvish actually shocked everyone when he put up a career-best 2.78 BB/9; a mark that was double impressive coming off the surgery.  For a guy who annually struggled badly when it came to walks and high pitch counts costing him wins, this was a nice memory to take into 2017 fantasy baseball.

Now digging in more on the upcoming season, Darvish entered into spring training with a clean bill of health and has had no problems thus far.  At a still young 30, Darvish has every right to go right back to his ace level in fantasy baseball and he surely will make a run at another strikeout title if he can avoid elbow/shoulder trouble.  And if Darvish can keep up with a BB/9 rate under 3.00, a mid-2.00 ERA is in the cards as well.  Finally with a draft price that is cheaper then the Noah Syndegaard's, Corey Kluber's, and Madison Bumgarner's of the world, Darvish is looking like a nice buy.  He just has to stay healthy though which is far from a given when it comes to guys who throw as hard as he does and with the history of pitching insane inning totals in Japan.